The Adamawa Government in collaboration with United Nations Children’s Fund (UNICEF) on Thursday launched the rehabilitation of some block of classrooms destroyed by Boko Haram insurgents in seven local government areas of the state.

Speaking at the launching ceremony in Balwhona Primary School in Gombi Local Government Area, the state Commissioner of Education, Prof. Kaletapwa Farauta, said the work that was being supported by UNICEF would be handled by members of the School-Based Management Committee (SBMC) of the benefiting schools.

Farauta, who was represented by the Deputy Permanent Secretary of the ministry, Mr Francis Pius, said 40 schools were selected to benefit from the support in Gombi, Mubi North, Mubi South, Maiha, Hong, Michika and Madagali local government areas.

While lauding UNICEF for the support alongside other interventions it had made in the education sector in the state, Farauta urged members of SBMC which comprised teachers, parents, religious leaders and traditional rulers to make judicious use of the fund provided in rehabilitating the selected classrooms.

“Based on how you utilise this opportunity, UNICEF has proposal for 47 more schools after this phase,” he said.

The Director, Social Mobilisation of Adamawa State Universal Education Board (ADSUBEB), Mrs Fadimatu Alfa, said the UNICEF package was N25 million shared among the SBMCs in the 40 benefiting schools with different amounts depending on the rehabilitation work needed.

Alfa urged communities involved to provide the needed free labour required as the money provided was strictly for materials. “You have carpenters, masons and the rest in your communities, let us all joins hands for this project to succeed. “We have Mothers Association in our schools who should also contribute to ensure free meals for the volunteer workers. “This project is the beginning of a good journey, many goodies are coming,” Alfa said.

In their respective remarks, the Deputy Chairman of Gombi Local Government, Mr Briska Dawus; Village Head of Balwhona, Malam Usman Ibrahim, and the Chairman of Balwhona Primary School SBMC, Mr Gabriel Naiwa, lauded the programme and assured that the community would ensure proper utilisation of the fund in rehabilitating the affected block of three classrooms.

A UNICEF Education Specialist, Mrs Maryama Dikwa, said the programme was being funded by Norway Government through UNICEF. 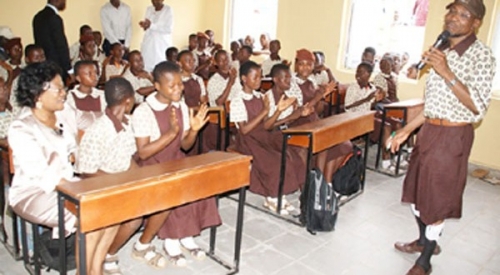