The group’s chairman, Seriki Olorunwa, says the prevailing health condition of the president has made it impossible for him to govern the country.

The group’s chairman, Seriki Olorunwa, says the prevailing health condition of the president has made it impossible for him to govern the country.

The youths state that the All Progressives Congress (APC) has subjected Nigerians to humiliation because of its self-serving activities. The group has given President Muhammadu Buhari an eight-week ultimatum to either resign or form an interim government following his absence from the country for more than 53 days.

The group warned that if the president fails to comply with the ultimatum, it would lead seven million youths in 22 states to force him out of office, Guardian reports.

“We urge the Senate, House of Representatives, state house of assemblies and parastatals to persuade Mr. President to resign and hand over to an interim president in the interest of Nigerians,” group said.

Though the youths pledged not to shed any blood, they however noted that they were prepared to fight than to live as slaves. “We are speaking with one voice for the masses because we want the progress of the people.”

The group said the All Progressives Congress (APC) had subjected Nigerians to humiliation because of its self-serving activities. The youths complained that that killing, kidnapping and robbery have become the order of the day in the present-day Nigeria. Meanwhile, the APC has said President Muhammadu Buhari is fast recovering from his illness contrary to allegations that he is on life support.

The national chairman of the party, John Odigie-Oyegun, gave the assurance in Abuja on Friday, June 30, while speaking with newsmen at the end of a meeting between the party`s national working committee (NWC) and state governors elected on the party’s platform.

Oyegun, however noted that Buhari will only return to the country after his doctors abroad certify him fit to do so. 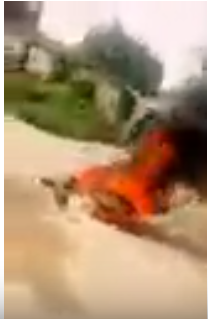