We Are Rejecting Buhari And Any Leader Who Rejects N30,000 Minimum Wage – NLC 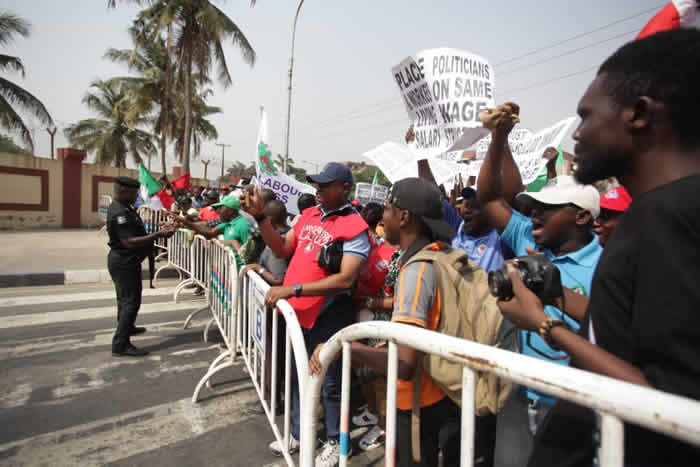 Members of Imo State chapter of the Nigeria Labour Congress, NLC, yesterday called on President Muhammadu Buhari to quicken the process of the implementation of the N30,000 minimum wage, adding that they were ready to reject anybody who rejects the minimum wage.

Also in Anambra State, NLC vowed not to vote for any political party that did not support the implementation of the new minimum wage. The protest in Imo State which ended with a slight disagreement saw the executives led by Comrade Austin Chilakpu march to one direction while some members demonstrated to the Government House roundabout along Okigwe road, led by Mr. Samuel Iwuala.

Vanguard gathered that the message for the protest was the same but they disagreed on where to carry out the protest. According to the group led by Iwuala, “We are here for the good of Nigeria. We are here for the upliftment of this country. We have been contributing positively to the growth of this country. “But what we get is insult, what we get is maltreatment. We are tired of the hardship we are passing through. We are insisting that the minimum wage must be N30,000. “With effect from today and till seven days, if nothing is done, we shall take our final decision. “Any president or governor who refuses to send the bill for our minimum wage to become a law then, we will reject that leader.”

Anambra makes no commitment to pay Also in Anambra State, NLC, yesterday, vowed not to vote for any political party that did not support the implementation of the new minimum wage for workers. This came as the Anambra State government made no commitment towards implementing the N30,000 minimum wage when the protesting workers visited the Government House in Awka. The state chairman of NLC, Comrade Jerry Nnubia, had demanded commitment on the part of the state government towards the implementation of the new wage for workers, but the Secretary to the State Government, SSG, Professor Solo Chukwulobelu declined to make any commitment, saying that Governor Willie Obiano would only “adjust salaries when the time comes.”

Apparently unhappy with the stand of the state government on the issue, the state chairman of NLC, Nnubia said the November 6, 2018 agreement ended the issue of whether the new wage would be paid or not, insisting that “the February 2019 general election would be foreshadowed by the new minimum wage.”

According to him, Nigerian workers would not be disposed to vote for any political party that did not support the implementation of the new wage. Although he enumerated the efforts made by the governor to please workers, including the 15 per cent increment of salaries for workers within his first six months in office and regular payment of salaries, he observed that the new minimum wage remained sacrosanct. Representative of the National President of NLC, Comrade Uche Ebeh presented the NLC President’s address, in which he traced the various stages of negotiation for the new minimum wage, culminating in the November 6, 2018 tripartite agreement by the government to pay.

When Vanguard asked him why the Imo State Chairman of the NLC, was not among them in the protest, said: “As we were marching from our Secretariat heading to the Government House roundabout, our chairman said that we should stop and divert to the office of the Secretary to the State Government, SGI, all of us refused that our original plan was to get to the Government House. “Then the chairman and some of his executives stopped and continued their journey to the office of the SGI. “Then myself and the other members moved to the Government House roundabout. The truth is that, we are not happy especially when your leaders abandon you, you cannot be happy.” At the time of filling this report, Vanguard placed calls to Chilakpu several times but he did not pick his calls.