K-Drama Recommendation: You can Never Go Wrong With “Vincenzo” 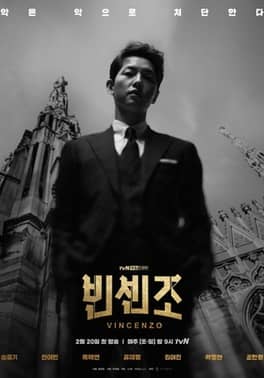 The Kpop and Kdrama frenzy gripping the world in recent times is far from fading any times soon and trust Korean pride to pour more fuel to intensify the fire ladies and gentlemen I present to you “Vincenzo”.

American series are beginning to lose their touch, as we often see the producers kill a perfect plot or storyline with too many episodes, when the episodes and seasons get unnecessarily long, the series begins to lose their touch, which is why I decided to settle for Korean dramas.

Asides from their storyline being great, one thing most people enjoy about Korean dramas is the fact that most of them are not overstretched, as we see movies with 16 to 20 episodes.

And with fewer episodes, you are definitely guaranteed enjoyment.

And for those who are yet to watch the Korean drama, well, Vincenzo is a must-watch Korean drama.

It is one of those dramas that don’t entirely focus on romance, despite there being one, instead, it focuses more on portraying the characters, and even though you are seeing them blowing buildings up and shooting people, you should know that you would be laughing your head off in most of the episodes.

And this drama is the first that I’m seeing them go to the extreme for, as you hardly see guns or that many actions in Korean dramas, but this Vincenzo breaks all the stereotypes, all the while keeping viewers at the edge of their seats with the action and suspense.

Vincenzo was released in 2021, between the months of February and May, it is a South Korean TV series starring Song Joong Ki, Jean Yeo Been, OK Taec-yeon, Kim Yeo-Jin and many others.

The movie focuses on Park Joo Hyung who was adopted by an Italian family and he soon joined the mafia, as he was later adopted by Don Fabio, the Head of the Cassano Mafia family.

Now renamed as Vincenzo Cassano, he becomes an Italian lawyer, a consigliere for the mafia and also the right-hand man of Don Fabio.

But after the death of Don Fabio, Vincenzo flees to Korea, to not only protect himself from assassins but also to retrieve gold that was stored away in Korea. And from there, his adventures begin.

Honestly I was captivated from the first to the last episode Korean dramas have taken a drastic turn from their usual storylines and had gone for something more daring. I rate it a 8/10 and its available on Netflix.

Watch The Moment Nollywood Actor, Olaiya Igwe Rolls On The Floor After MC Oluomo Gifted Him A Car