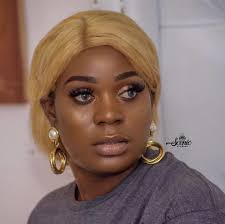 The major reason why actress, Motilola’s marriage to her husband crashed has been linked to her extramarital affairs with her colleague, Kunle Afod.

Few days ago, Motilola took to her Instagram page to announce the end of her marriage to her soldier husband, Adekunle

According to controversial blogger, Gistlover, Kunle Afod’s wife found out about her husband’s affair with Motilola and she could not keep it a secret.

Kunle’s wife, Desola exposed the actors and also revealed that her husband is the father of Motilola’s last child because of the striking resemblance between them.

Gistlover said that Motilola’s husband who happened to be a soldier heard about all these and decided to abandon her and the children by pack out of their home.

Read all Gistlover wrote below;

Hello tueh tueh,it’s no longer news that actress Motilola marriage don hit the rock and it was allegedly based on promiscuity with her said Boss,Kunle Afod and another Actor who calls Aunty Moti, MUMMY.

Trouble started when Desola Celeb Wife got a hint of her husband affairs with Motilola, all hell broke loose, they had a serious fight then but Boda Afod beg him wife make she no loud the matter as Motilola was still married to her Soja(soldier) husband then, Desola, however, didn’t take it easy with her as she goes about telling everyone who cares to listen how Moti Dey lick her husband gbola.

Motilola husband got to hear about the saga one way or the other and it caused serious issue between them of which they settled and moved on but according to our source the husband was no longer giving her attention again in the marriage after the Kundera Afod saga and it caused another round of argument between the couple to cut the long story short the one wey cause divorce Na when Desola Dey go about tell everyone say e get one of Motilola pikin wey she born for Kunle Afod, say Motilola pikin Na her husband get am, say the pikin look like Kunle Afod gan, This kept on going until it was sent to oga soja, all hell was let loose, Gbas Gbos everywhere, Naso oga vex comot for house for days and madam Moti pack load go one Estate for Ikotun Lagos, for governor’s road.  As for the upcoming Nollywood involved, he is the side side nigga because everyone for Nollywood knows Motilola is Kunle Afod chic and they even get house for Ibadan together, Na Motilola be Emi oga, Na why Desola Afod goes after her to claim baba awon boys from her, I come in peace”

Toyin Abraham Celebrates Her Son, Ireoluwa As He Clocks 3