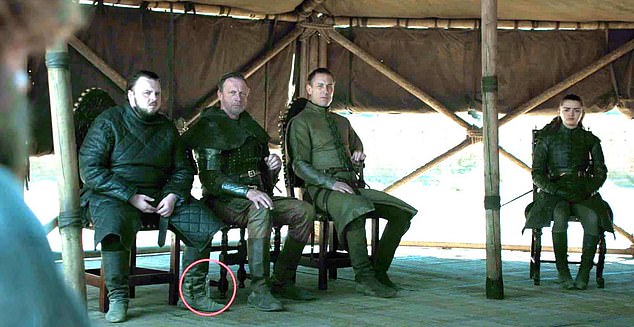 Game Of Thrones fans labelled the hotly-anticipated HBO show a joke as they saw a bottle of water in the finale in another awkward editing blunder. The fantasy series faced heavy criticism when eagle-eyed viewers pointed out a Starbucks coffee cup in Winterfell’s Great Hall in episode four.

So no wonder fans raised their eyebrows when they spotted a plastic bottle which was barely shielded by John Bradley’s leg while he was in character as Sam Tarly. Fans were nervously waiting for the group to come to a conclusion on what should happen to Jon Snow (Kit Harington) after he stabbed his lover Daenerys Targaryen (Emilia Clarke) to death.

As well as deliberating Snow’s fate, Tyrion took charge to name Bran the Broken as the new king to rule over Westeros. But viewers were distracted by the bottle of water that was peeping out from behind Sam’s leg in another blunder to plague season eight.

MailOnline has reached out to Game Of Thrones’ representatives for further comment. Social media was awash with fans’ complaints about the clumsy editing as they dubbed it ‘water bottle gate’.

Others added: ‘When the writers just want to get over the show and leave a water bottle in the scene #GameOfThrones #watergate2019 #GameOfThronesFinale #starbuckscup all over again.’